Archive for the tag “media”

This is what I wrote after hearing about the recent bombings. I chose not to post it at the time. I changed my mind. Here it is. 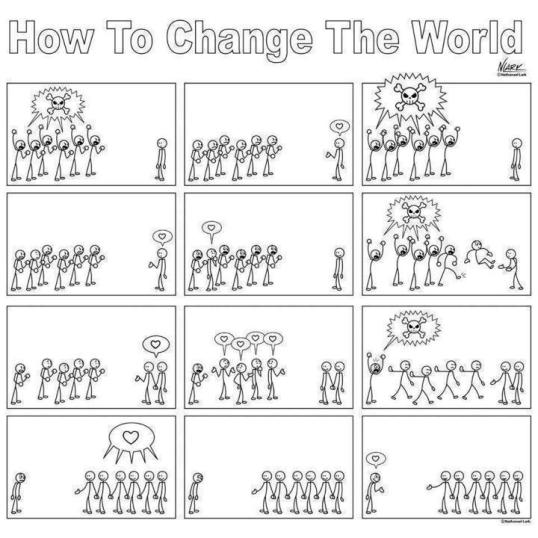 I admit it, I’m usually the first to look for a cover up or conspiracy when something like what recently took place in Boston occurs. What scandal needs covering up or what laws want amendment or passing on the sly? I’m not saying that someone or some organisation might not try and take advantage of the situation and try and do something dastardly for their own gains while the people is still reeling from this latest event. Don’t raise to the bait.

Let us grieve our friends, family etc in peace. In Peace. Don’t give that up or away. Don’t turn against other humans. Don’t go where rage and anger lives. Don’t listen to the media. Refuse to join in another mans cause*.

This time, at this point, when I ”look” for energetic traces I can honestly say I don’t feel any. All I Can see is a bunch of beings (or rather their souls) getting together and co-creating an event we view as deeply tragic in 3d. The intent being pulling people together and opening up hearts. It sounds like they succeeded. What I’m saying is that it was not orchestrated by some dark entity. And even if you think it was, the dark-workers ultimately serve the light too.

So don’t play into the hands of those who wants to make it about us and them. Don’t make it about some place else. It’s about souls helping other souls. Sacrificing their bodies of this incarnation to help those around them in a dramatic way, just like soldiers have laid down their lives for friends and family, sorry, their country…

Please receive it as the selfless act it was given. Allow your hearts to open and freely give and receive love in this challenging time. I repeat, Don’t make it about us and them. Make it about opening to love and each other. Us. We, One people, one planet.

People do not want war. Governments sometimes do. Guess who gets to do the fighting.

If told ”you’re not patriotic enough” don’t listen. It’s not a sin. I’m pro-peace and pro-people. Patriotism is a way of sneaky emotional blackmail riding on the ”not enough” train, a way of turning it into ”us” and ”them” again and look where that has got us? It’s a tried and tested way to get You to succumb to another’s bidding, socially accepted bully tactics.

Before you write this off as idealistic waffling I’ll tell you I questioned that too. Thus I wondered if I would have felt differently had it been at home; if it had taken place on the Isle of Wight. Or had it been at a summer music festival, killing fellow traders and visitors.

I remember well the London bombings. I was there. I remember Lockerbie, Scotland. I remember visiting Lockerbie many years later and noticing how I could still feel a rift or a kind of an echo and all the ghosts of those exiting life at that time. So many years ago and still so tangible, I felt the shift in air way before I saw the roadsign telling us where we were. The subdued under-current. Still present.

And I think my reaction would have been the same as when receiving the news yesterday. I hope I’d still feel as level and thus able to hold space for those grieving loved ones.

Please don’t get me wrong; I feel your pain if I allow myself to go there, so I don’t. That wouldn’t serve anyone. Like my friends on the other side I choose to enfold thee in my virtual arms and hold thee, in love and in light. I’ve got water-proof shoulders ❤

Don’t let anyone use this as an excuse for turning us against each other. Enough already. Don’t allow it.

Join me and many many others and wrap your love and peace around the world. And while you are at it, love the Irakis, the Egyptians, the Arabs, the Koreans etc etc too.

If you feel resistance – look at that within your self.

Love those who are trying to start another war, coz their game is up if we, the people of earth, choose it to be that way. If there is no one to fight there can be no war.

If you need an example, then read some Harry Potter. There’s a seed of darkness within us all, but what we choose to do with it is up to us, each and every one of us. There are light switches but no dark switches. Shine your light and the dark has to move on somewhere else where there is fuel or fodder for it and someone to ignite. Know why you do what you do. That is consciousness. That is progress. Ignorance breeds discontent. Love ruins their game.

I’ve spent this lifetime NOT plugged in to the mainstream reality, so I can be the emanation and a voice of peace. I hope you will never know how painful that has been and the price paid, and instead receive my gift to the world at this time.

Never just take anyone else’s truth, find your own.

* Another man’s cause – the Levellers