The Oilskin Coat at Luccombe

Another sneak peak from my forthcoming book “the Spirit of Flying”, enjoy.

One evening, just as autumn was beginning to turn to winter, I’d spent the evening drinking (de-caf) coffee with a couple of close girlfriends and was driving home late at night. We used to get together for a girlie once a week and since I was the only one with a car, we usually met at either of their houses.

It was about 2am and I wasn’t particularly tired. My mind was multitasking as usual; writing a to-do list for tomorrows day off work and playing with designs for the gem stones that had arrived in the post earlier in the day. The very familiar road was empty but I was still driving quite slow. It was only drizzling but the temperature was close to freezing and there were lots of leaves on the road.

I’d just turned the corner coming down towards Luccombe Chine when I saw a figure beside the road. He (or she) looked about 5’10 and dressed in an old fashioned oilskin coat. Nothing unusual about that, they are rather popular with some country folks and on an evening like this the fashion police were certainly not out on patrol. How odd, I thought, I didn’t know there was a gate in the fence there? Who’d be out walking in the middle of the night in this rather foul weather? Someone who’s lost their dog perhaps.

As the figure began to cross the road, I was surprised s/he took no notice of the headlights of my approaching car. I applied the brakes and slowed down to let him/her pass safely at a pace that wouldn’t cause him to startle and slip. He stopped in the middle of my lane. Drunk? I wondered and slowed down further.

When I was less than 20 yards away s/he just faded, right where s/he had stood in the middle of the road. Huh? Oh. Yay. I’d stopped to give way for a ghost. Ok. I chuckled to myself. At least I didn’t have to feel bad for not wanting to pick up a hitch-hiker on an isolated road in the middle of the night… I then checked the fence as I drove past. Of course there was no gate in it. 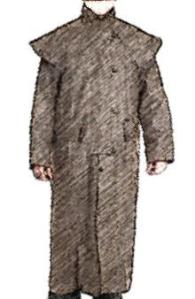