Archive for the tag “animal cruelty” 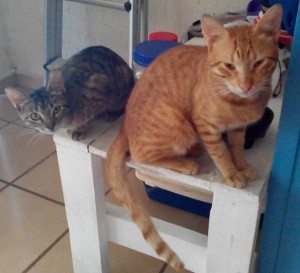 Tabi and Rojito, a few months ago.

This is our Miracle cat, Red’ed or Rojito, meaning little red in spanish.

Red and Blondi were left behind when their family moved away. For approx. six months living the indoor life, the next fending for themselves on the street.

Little by little they began to trust us, and found our kitchen a safe place to sleep, hang out, and get a little food. Blondi was the shyer or the two: never wanting to be touched but happy to play with Tabita. Needless to say, they’ve been my saving grace being stuck in the house providing me entertainment and company.
Then about a month ago Blondi was gone and and a week later Red disappeared too. And most cats in the ‘hood, a neighbourhood dominated by cats. We were left coming to terms with not expecting to see either of them again. 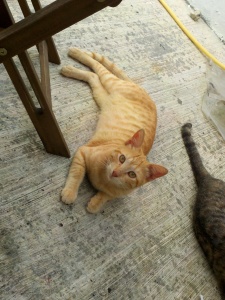 This is Blondi, Red’s brother, a month before he disappeared.  Gentle, shy and a picture of health.  How anyone can consider such beautiful beings vermin and kill them is beyond comprehension.

Thus I was overjoyed to see Red come through the door but it quickly turned to heartbreak seeing his condition. He can only be described as a skeleton with fur. He was weak but he’d come to us for help. Make no mistake, we are his furever home for as long as he wants it to be.

So why didn’t I rush him to a vet? It was Sunday evening. I got one leg in a cast and need help to get out – but who and where? My husband have been working for four weeks without a day off. The language barrier were I to go on my own in taxi etc. And of course lack of money. Red did not appear to be in any acute pain, though I know cats have a very high pain tolerance level. I don’t know where he’d been or come from or how he’d made it back. He was very weak and coughing blood. Frankly, we didn’t think he’d make it through the night and didn’t want to break his trust by putting him in a box, in a taxi, to spend it in a steel cage surrounded by fear and strangers. If he was going to make it he’d pull through, and if he didn’t, he would die at home surrounded by love and friends. He picked his spot – my floor cushion by the back door – opposite the bedroom.

I sponge bathe him when too weak to groom, scratched when it looks like he’s got an itch. Fed him scraped fish mixed with water every two hours and whatever else he’d eat. Sometimes a teaspoon, sometimes a tablespoon. One day at a time.

The basics; Red is approximately a year and a half. Now if someone told me he was 15 I’d believe it. That is how much he has aged in the week he was missing thanx to human cruelty. He eats very little but he eats. He drinks. Goes to the sandbox. He coughs but he’s stopped coughing blood. From a healthy and well muscled young male to an affectionate ghost of his former self.  I can only presume that the newest cat-hating neighbour followed up on his threat to put out food laced with rat poison “to get rid of the kittens” he called vermin.

Red is such a little fighter. He’s come so far. I’d like to take him to a vet still to be checked over and get whatever extras he needs to help recover his health. Without it there’s no knowing what internal damage has been done. He finally started grooming again last night so after two weeks of round the clock watching and worry, I’m beginning to relax a little.

I used to say If you can’t afford to take your charges to the vet, don’t have any. But my vulnerable heart can not turn away a cat in need at my door. I can not close the door and say go away you are not my responsibility. I will do what little I can to help, and right now it isn’t a lot. Clean any wounds, put vegetable oil on ticks and a bit of kibble, and always have clean water available outside for any passing cat or dog.

We struggled to find the money to feed us all at times but somehow we do, we find a way. Now there’s only three left and I desperately want to find somewhere else that is safer for the cats and move. I feed them and keep them in at night because that is all I can do.

Most of all I wish I lived in a world where respect for all life was the norm and sick care and health care was free and available to all everywhere.

If I put this on my fb page I’ll have to deal with “How dare you ask for money and help again – you should be ashamed of yourself” so no gofundme. If you want to help, please help. If you don’t, then don’t. I understand and I won’t judge you. The cats will be very grateful if you do. If you can and want to help go to the top of the page to “Other ways to connect” and then click on Miaowser’s fund. It will take you to paypal. And like the Tesco add says, every little helps.  On behalf of Red and us, thank you for reading. 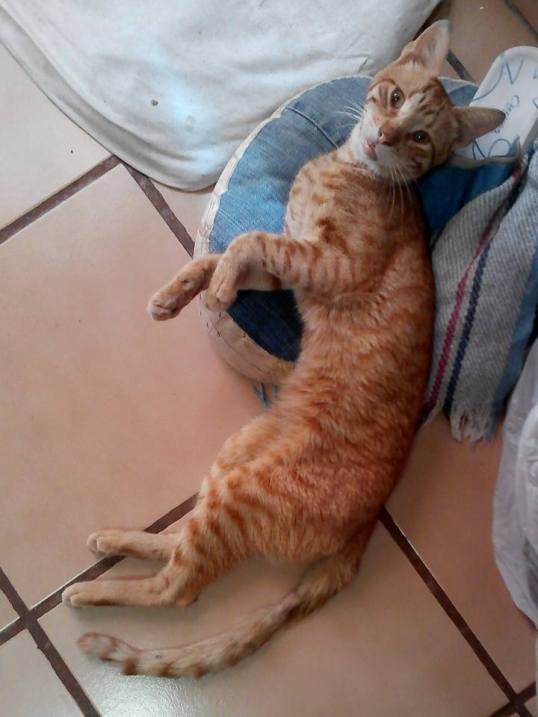 Red, now, back for two weeks.